Casey has always been my favourite. I like it that he's a bit of a nutter. He has no glorious origin story; he just teaches himself lots of martial arts and goes out and beats up criminals. Design-wise, he doesn't need much doing: just a bit of a cooler mask, hood, darker clothes, all to give a bit more menace. His fighting style will be various bits if boxing, kung fu, karate, thai boxing mixed with some good stick skills; kali, escrima, etc. He'll be pretty fast, pretty vicious.

In our story his night patrols to combat the rise in organised crime on the streets bring him into conflict with The Foot and Raphael. He is the super of April's building and has a crush on her so watches over her and protects her when The Foot try to silence her. He teams up with the four turtle brothers to help take down the army of ninja and stop the evil alien Krang from destroying the city. 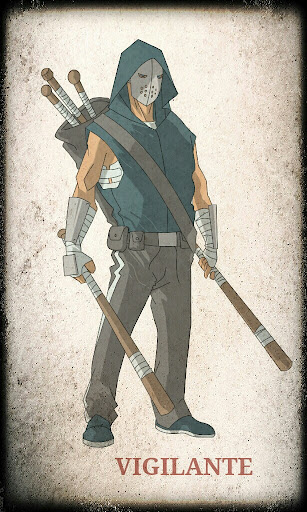