Krongar against the Star God

Here is another piece which I did for the Barbarians of Lemuria RPG (...available now on DriveThruRPG.com...).

This was a tribute to the cover for the last edition, but I took a lot of licence with it (mainly because the ape on the original had a mask on, which looked cool, but I really wanted to draw an angry gorilla face. I do love my monkeys (and, yes, I know it's not a monkey, I do have a degree in anthropology.)).

The piece was done with a transparent background, the frame at the bottom made from some jungle vines, as I was asked to provide an image without corners. It was fun to come up with the composition.

The big elder god thing at the back was just made up as I went along. It is described as a writhing mass of tentacles with eyes, so I added in some mouths and eyeballs at various sizes and angles to convey its' unnaturalness. It's lit from within with the glow of stars, to express its space alien nature. I was a bit daunted at approaching the tentacles at first, but I got quite into it in the end. I faded out the beast/god/thing by duplicating its's layer and filling it with white and then dropping the opacity on that. This was to give it a bit of a feeling of distance from the foreground action. 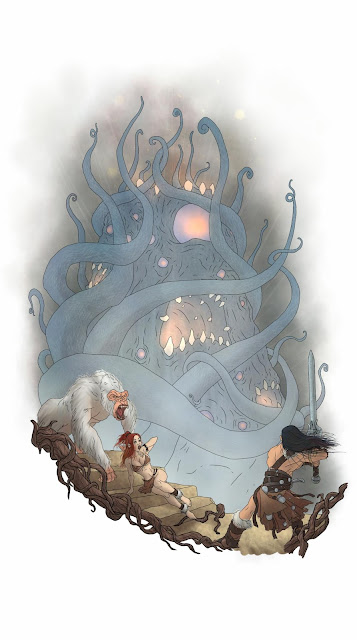