For those interested here's a little bit of the process involved for these:
I usually start by doodling a very rough layout on some paper in black biro. Nothing fancy, just a4 copy paper, usually folded in half or quatered to fit in my pocket. I like biro as it's fast and easy. The thumbnail will usually be about 2" in size- just a small one to get fhe gesture and anatomy right. Details and such can be fixed in the final piece.
Then I take a snap on my phone (htc desire) and open it in sketchbook mobile. Dropping the layer's opacity down I add another on top and set to multiply. I then draw with a small black brush. This is done on the phone with nature's greatest stylus: my finger. Each stroke usually has to be done 2 or 3 times and this stage really breeds patience, especially as I usually do this on the metro on the way to/from work.
I then drop the opacity of the linework down, delete the reference layer, drop a layer underneath and put in the colour flats.
On another layer above I put in the chunky shadows, nice and fast with a chisel-tipped marker brush. This opacity gets dropped down too.
Over it all I add a scratchy texture with the  opacity dropped right down, put on the text and add a grainy border in pixlromatic.

Raph is the angriest of all the brothers (and also the shortest- coincidence?), frustrated that his existence is nothing more than an accident. Master Splinter insists that there are no accidents.
Raph constantly clashes with Leo over everything, they are too alike but refuse to acknowledge it.
When someone trains in martial arts they always hit a point where they think they are invincible and need to constantly seek out combat in which to prove themselves. Getting past that point is a major breakthrough where you discover that you are only now ready to truly begin learning. Raphael, however is stuck with his rage and unable to move on. He patrols the night alone, striking out as a vigilante. The rise in vigilantism has caused the NYPD to form a special task force. It is on one of his patrols that Raph first violently encounters Casey Jones and later saves April O'Neil from The Foot, confirming their presence in the city.

When considering how to coreograph the combat I was first struck by the apparent dichotomy of Raph's choice of weapons: the sai. Why would a violently aggressive fighter choose a defensive weapon? As a tool to get in close to an armed opponent. He'll drop them when he doesn't need them. He has knives strapped to him to quickdraw in different close combat situations. The turtles have no pockets so make use of pouches and webbing.
Raphael keeps track of his kills by carving them on his shell. 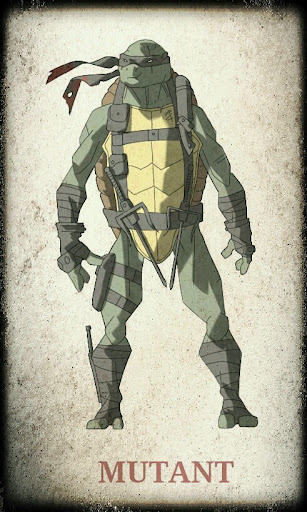