Mikey loves his brothers: that's what defines him. He just wants everyone to get along and as the youngest, he idolizes his brothers (from a design perspective, this means he takes visual cues from the other three- leo's cloth is copied in his tshirt, donnie's bandana style, raph's pouches). He works hard to keep all the brothers together and communicating. He trains with Leo, he talks tech with Donnie (he's hacked his own xbox and can build a pc) and plays beat 'em ups with Raph. Once a week he gets the bros together to watch kung fu movies and play Tekken or Street Fighter (this used to be a Friday night deal but Raph is out patrolling almost every night over the weekend now).
He plays online games for money, competing in tournaments and farming MMO characters. His love of pizza is unrivaled.
In combat he fights with one set of nunchaku. Using two, while it looks flashy, severely limits the range of techniques which you can employ and pretty much eliminates any grappling moves. He employs traditional taijutsu but embelishes it with moments of flair from Bruce Lee movies and old Shaw Brothers flicks. He always likes to fight to a soundtrack, using his custom-built shell-pod (TM).
He is very easy-going and friendly, but if you threaten or harm his family he has the capacity to explode even worse than Raphael. 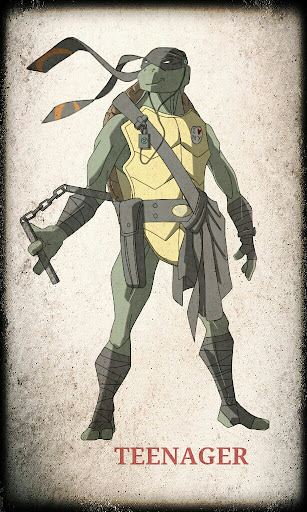