I've always thought of Donnie as the spiritual heart of the four brothers. He's the calm at the eye of the storm. Because of this I wanted him to have a certain priestly quality to his design.
I put in some shinto prayer flags on his belt and used the shoulder straps to give him a bit of a yamabushi look.
Rather than worshipping the spirits of places he devotes himself to the working of machines. He creates and maintains all of the brothers' weapons and gear, acid-etching their custom weapons (he did etch Raph's first few pairs of sai but has stopped now as he keeps throwing them at people and dropping them).
He has also constructed a massive hydro generator complex making them self sufficient and has hacked together a city-wide private communications network and routes high speed, uncapped broadband from Wall Street. He also does a lot of online gambling, working the odds exactly and always coming out winning; it's just maths to him. This keeps the family solvent and covers all their expenditures.
He prefers the staff as it is one of the most basic, fundamental of weapons (as my two year old said recently: "It's just a stick, daddy.") and allows him to implement a great degree of physics into his fighting. He uses his environment and his opponent as factors in his style more than the others do. To him, fighting is just a different type of maths. 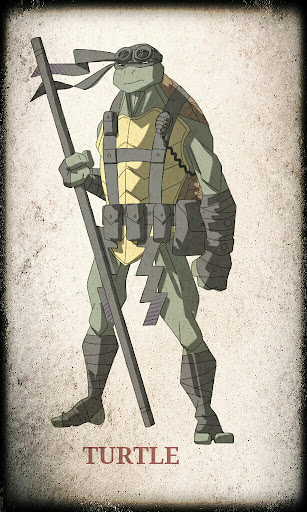