With all of the talk about the new Turtles movie I've gotten quite excited. I know people are moaning about it already but I know a couple of people working on it and I have faith that it'll be awesome.
Turtles had quite a big impact on my life so it holds a special place in my heart. I used to buy the original comics with my pocket money from the comic shop in town. I drew and coloured an A3 poster which I kept on my bedroom wall for years. I had done a couple of years of judo when the cartoon came out and it inspired me to keep going and to search out more. By the time the movie came out I was in high school and had made friends with a lot of new guys: through them I found different styles to learn and eventually I found a dojo who would teach me ninjutsu. This had the most profound impact on my life.
As a result I would like to see the Turtles done justice, so, short of working on the movie myself (hi, Mr Bay, please PM me!) I have decided that if at least I can get my vision out there than I have done myself justice.

All that crap said, I'll start getting my versions of the Teenage Mutant Ninja Turtles up for you all to see.

First we have Leonardo, the leader of the crew. He is a devoted son and faithful student. Like his brother, Raph, he is filled with rage and angst but he buries himself in his studies, training harder than all his brothers to keep himself under control. As a boy he read Musashi's Go No Rin Sho every day (who didn't) and became a firm follower of the Ni Ten Ichi Ryu sword style. Recently he has begun to mature and found himself profoundly affected by Yagyu Munenori's Life-giving Sword, seeing it as the true Ninja way to perfection of sword and spirit. Of all the brothers he is the most versed in traditional teachings and is trained to the highest level in all aspects of the ninja. 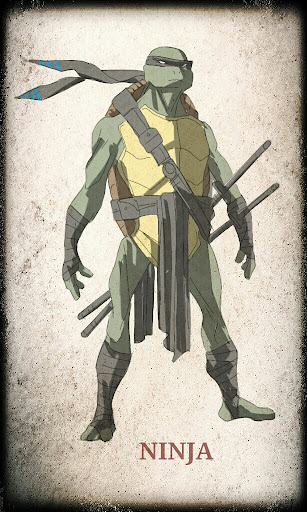