I was sat on a bus in 'The Yorkshire' and I thought I'd do something productive so I found one of my old Hellas linework illustrations and thought I'd colour it.

I had to tidy up the linework a bit first though. An HOUR AND A HALF LATER I was finished tidying. Man, my linework has really tightened up since I went all digital. I also saw at least a dozen errors which I wouldn't have let slide now but I left them all in otherwise I might as well have redrawn the whole thing which would have defeated the purpose of the exercise.

Anyway, it was nice to revist an older piece just to see how much I have moved on. Sometimes it feels as if you haven't gotten anywhere until you really go back and pull apart your old stuff to see for yourself.

It was also nice to revisit this piece. A lot of these Hellas pics are very close to my heart: I redrew and redrew them trying to get the poses just right. This amazon girl was always a favourite- I really like how her face and pose turned out. The costume, armour and weapons are all exhaustingly researched for precision as was my practice on all of the Hellas stuff. Being an anthropologist myself and having an archaeologist brother (we all know archaeology is just a branch of anthropology ;) ) I find it invaluable to dig into and pull apart the cultural reference so I can base my work on it. Even the grandiose full-on fantasy pieces have a foundation of acurate historical artifacts. I find adding this sort of thing adds believability to the unbelievable. 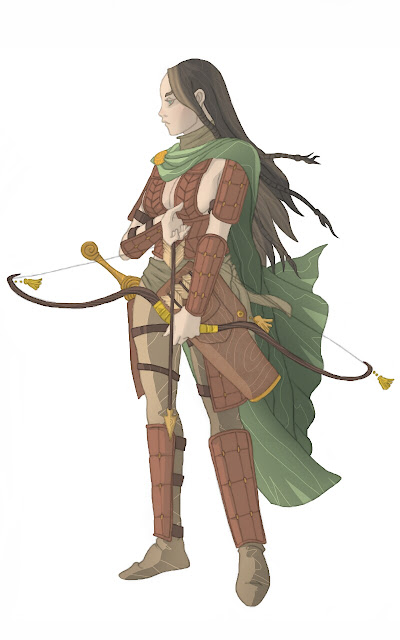 I really like your work. And the games that you illustrate.

That's very kind of you to say! Thank you very much. I always try to do my best to do these games justice as I am a lifelong gamer myself. I like being a part of getting good games out there for everyone to enjoy.