Last Stand of The Spartan

Well this was a bit of a beast.
I set out to try and create an 'iconic', frazetta-style hero image. I tried to include as many techniques for visual composition as I could, from the arrow shape of the lead figure, the rule of thirds, the golden ratio, having the background arch spiral round to draw you in, having the skeletons weapons and bodies angled to focus you on the character, using areas of contrast and detail to attract your eye to the hero.
I also wanted to get away from using found textures so much for my skies so I set myself the task of fully painting it for this one. I managed to find a technique which I'm quite pleased with and hopefully it's something you'll be seeing more of soon.
The Spartan himself has a lot of engravings on his armour, most of which you can't see anymore. They were to represent his path from Sparta as he hunted various monsters through the night. Acting as a sort of champion of good against nocturnal forces and picking up various protective wards on the way. Now his journey is at an end in a ruined temple in the far north of Dacia.
His story may continue in the forthcoming 'Carpathia' game as we return to this region in the 1800s. 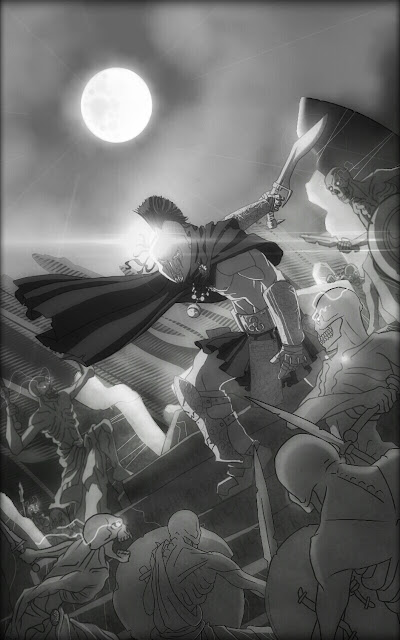