I am currently edging towards wrapping up my work on the forthcoming Heroes of Hellas RPG and am hoping to go out with a bang.
The current piece I am working on is a Frazetta-type piece of a warrior fighting off a horde of undead.
I have redrawn and redesigned the main character several times but I ended up going for a Spartan to make it look 'greek' on the first visual read. His posture was changed many times to convey dynamism and tension in the final piece.
Anyways, I drew the character a little larger so I could get some more detail into him and thought I'd save the linework in case it was any good for editorial purposes. I then banged on a couple of textures and some text to make a quick poster on the train on the way to work, which is what this is.
I am also delving into a massive, forthcoming project which is a Hammer Horror style game called 'Carpathia'. This has a small influence on this piece: kind of a secret prequel if you will. In the final image our Spartan will be far from home in the cold night of northern Dacia (yep, that's Carpathia fact-fans. We see this lone monster hunter, his armour inscribed with signs and seals from his long adventures battling the forces of the night at their nexus. Maybe he fails in his final quest. Maybe he succedes and beats them back for a thousand years. Only you can decide... 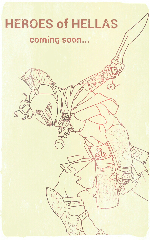