I am a huge fan of the original Exorcist film. It's one of my all-time top movies.
I love the script, the acting. The fx work was revolutionary. The cinematography is breathtaking.
The sheer effort put into its' production shines through every time.
Plus, I first watched it when I was quite young so it scared the shit out of me.
The cultural and anthropological study of possession in its many forms is one of my specialist chosen subjects, too.
So I was intrigued to see the new TV series of The Exorcist.
And then I was totally blown away by it.
If you haven't seen it: you need to.
And I had to pay my respects in some way, particularly to the two stand-out stars (not to detract from any of the other cast in any way- they are all absolutely amazing!); Hannah Kasulka as Casey Rance and Ben Daniels as Father Marcus. They both have amazing faces for drawing: both of them possess singular qualities which make them quite beautiful.
So here are my two quick tributes. Both done in black and white.
With Casey's I tried to capture the luminous quality, to show her innocence and to show a kind of divine light shining down on her. Her eyes are amazing so I tried to convey the "backlit by stars" quality they have.
Marcus' picture was an attempt to capture the sadness in him. He is a very powerful character but has a fragile core. I love how Ben Daniels is playing him; the depth and nuance he is bringing to the performance is amazing.
The pictures are both done with .5 linework and then a shading layer with airbrush.
Hope you like them. 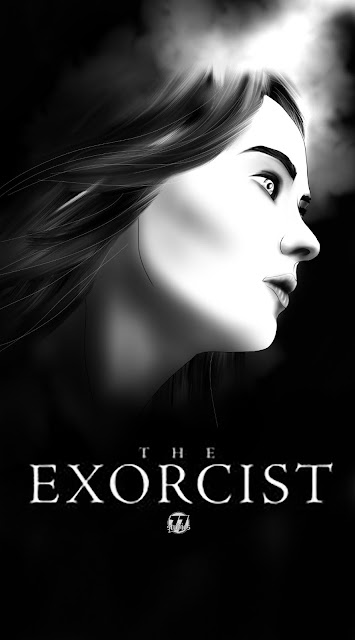 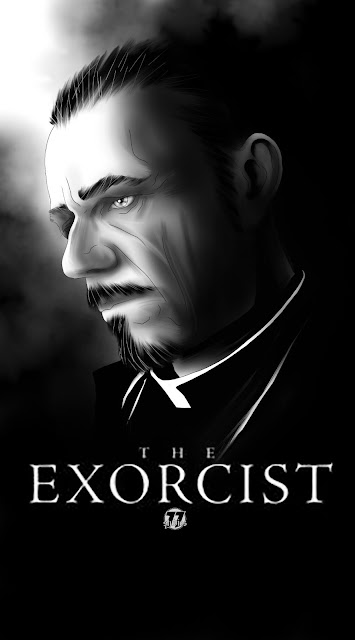 Email ThisBlogThis!Share to TwitterShare to FacebookShare to Pinterest
Labels: Poster, The Exorcist